Emphasizing insight biochemical mechanisms: oxyresveratrol possesses its actions in;
1) inhibiting of tyrosinase activity and glycation process
2) anti-oxidant activity and
3) retarding of cell aging.
So, the occurrence of translucents and black spots underneath skin will be retarded or blocked. This’s reasons why Medicinal Plant Research Institute (the organization under Department of Medical Science), has launched the project: development of herbal cosmetic product prototype from Mahada’s extract. This project has regulated to be operated according to internationally standard research processing. 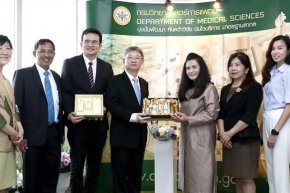